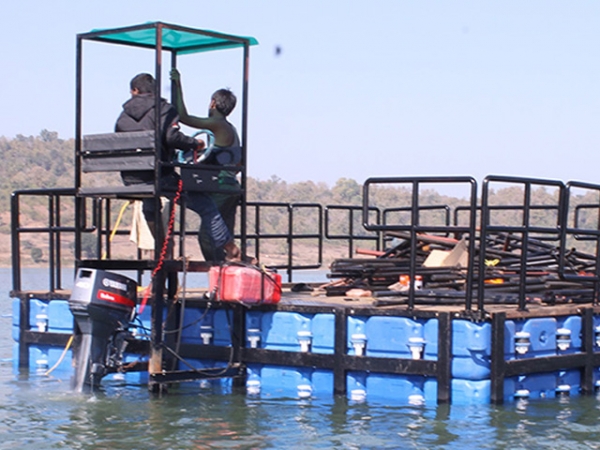 Fighting through numerous hurdles of setting up a power plant in such a remote location , including problematic locals, Jhabua Power has been successful in synchronizing phase one.

Like all dam intake wells – the Dam intake of Jhabua power plant was planned where there would be no dearth of water even in extreme summer. However due to un-favorable site conditions and other unforeseen circumstances, Jhabua was forced to postpone the targeted commissioning date of the Dam Intake Well by 4 months.

Just as the management of Jhabua were coming to terms with this setback- they had to face the fury of mother nature in the form of unprecedented excessive rains.

The site for the Dam Intake well was situated on the back waters of the Bargi Dam and was accessible through dry land of the receded back waters of the Dam for more than 11 months of the year. However this time it was different. The excessive rainfall caused the level of water to rise drowning all land leading to the site- thus cutting off logistics to the site.

Each Day of delay was costing Jhabua 5 million Indian rupees.

Unfortunately with more rains this time, the level of the water just kept rising and showed no sign of receding even after 2 months. Jhabua could take it no longer- A special team was appointed directly under the CEO to work out a methodology to resume work at site. The team thought of everything cutting a road around the dam – making a coffer dam bringing in barge everything.

Inco analysed their problem and proposed a floating transportation solution giving birth to the MTS 40.

THE MTS 40 is a low draft, Corrission resistant steel envelope covering of HDPE floating cubes with an Anti skid Aluminium Flooring. Powered by a 40 HP 2 stroke engine with electrical steering the MTS 40 can carry loads upto 4 tons in one feet water.

For Jhabua the major challenge was time and what transpired later was the Almighty working through Inco Mechel.

Within a span of 21 days the product was manufactured transported and installed at site Jhabua-1100 Kms from With amazing co-ordination between the sales team, purchase,and logistics the manufacturing team of Inco Mechel resolved the Jabhua constraint within record time. And construction began at the dam water intake site immediately there after.